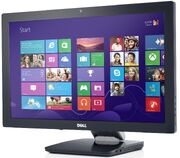 What is a monitor?[] 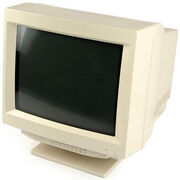 A monitor, also known as VDU and VDT, (video display unit) (video display terminal) is a visual output device for displaying images and videos from a computer in real time. This allows users to create, view, or edit commands we send to the CPU (central processing unit), located on the motherboard. There are many different kinds of monitors, such as, CRT, LCD, LED monitors, and many more. Some popular monitors are CRT (Cathode Ray Tube) and LCD (liquid crystal display), both with advantages and disadvantages over the other. CRT monitors are often cheaper, more durable, and has better gradation between colors. LCD monitors are lighter, more compact, requires less electricity and have better resolution. Each type of monitor functions slightly different from the rest.

A Cathode Ray Tube Monitor has a large vacuum in the back with a cathode containing a heated filament pointing forward. This filament acts as an electron gun firing streams of electrons across the screen as much as 50 - 100 times per second to give us a continuous, real time image, though the speed varies depending on the GPU installed. The direction of these streams are changed and aimed by a set of electromagnets. This is located in front of the cathode and is what rings it. The electron streams fire at the back of the glass panel that acts as the screen. On the back of this panel are millions of tiny phosphor dots made from a fluorescent material. These dots are in groups of three, red, green, and blue. When the electrons repeatedly hit the dots, it generates any color on the spectrum depending on the different combinations of the red, green, and blue dots.

There are multiple different kinds of arrangements of RGB dots. There is Lochmaske shadow mask, Streifenmaske aperture grille, and Schlizmaske slot mask. See picture below for visual.

Liquid crystal display monitors are made with two pieces of specially treated polarized glass pressed together. In between them is liquid crystal, a material that flows like liquid but has some organization in its molecules. The liquid crystal allows different wavelengths to pass through it in various parts. Unlike CRT monitors which try and produce light, the LCD monitor tries to stop specific wavelengths from entering through the screen and only allowing the color and its corresponding wavelength to pass to create what human brains perceive as color on the screen.

The brief history of the monitor:[] 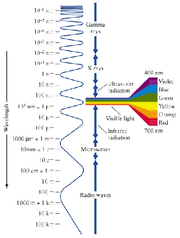