Peripherals are devices that add onto the functions of a computer. They magnify what a computer is capable of without actually changing the core of it. Although peripherals are helpful when it comes to the workings of the computer, it is able to function fine without them. On average, at all times a computer has at least five peripherals attached to it. Some examples of your every day ones are the keyboard mouse. The modern keyboard which we have today, was built off of the typewriter. There were a few main developments that enabled the move to the computer keyboard.

In 1930, the teletype machine took the workings of a typewriter, and combined it with the telegraph. Also, the punched card systems were also combined with typewrites to make what is called Keypunches. In 1946 the Eniac computer used a punch card reader as its input and output device and in 1948 the Binac computer used an electric typewriter to input data onto magnetic tape as well as to print results. The continuous growth lead to the creation of the computer keyboard. Douglas Engelbart was the man who created the computer mouse. Before the mouse was created, in order to be able to do a task on a computer, you would type commands. Engelbart came up with he idea of attaching the cursor to a device that had two wheels that would allow you to move the cursor around. A prototype was made out of wood, and In 1970 it was patented.

in 1972, Bill English created the track ball mouse which allowed the cursor to be controlled by moving ball in a permanent position. Then one thing lead to another, and now we have wireless mouses. There are many more peripherals than just the mouse and keyboards so here is a bit about how some of the others function and interact with the computer. Like the mouse a keyboard, the monitor makes using the computer possible. The monitor is an output device that displays images and text on the screen. 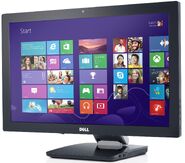 On a desktop, the monitor is plugged in through an external connection on your PC unit. Also known as an audio output device, a sound card is a device that is used for producing sound on a computer which can be listened to through speakers or headphones. The main parts of the sound card are the DAC which enables it to change digital data to analog sound and the ADC which enables it to make recordings from analog sound inputs.

The printer, used to print text and images, is a output device that takes the data stored in the computer and makes a hard copy of it. The most common way a printer is connected to the computer is via a USB cable or wifi. Another peripheral is a projector which takes a image made by a computer and projects it onto a screen. The projector is able to project still slides or moving pictures. A projector receives its input most commonly from an HDMI cable or a VGA cable from a computer.